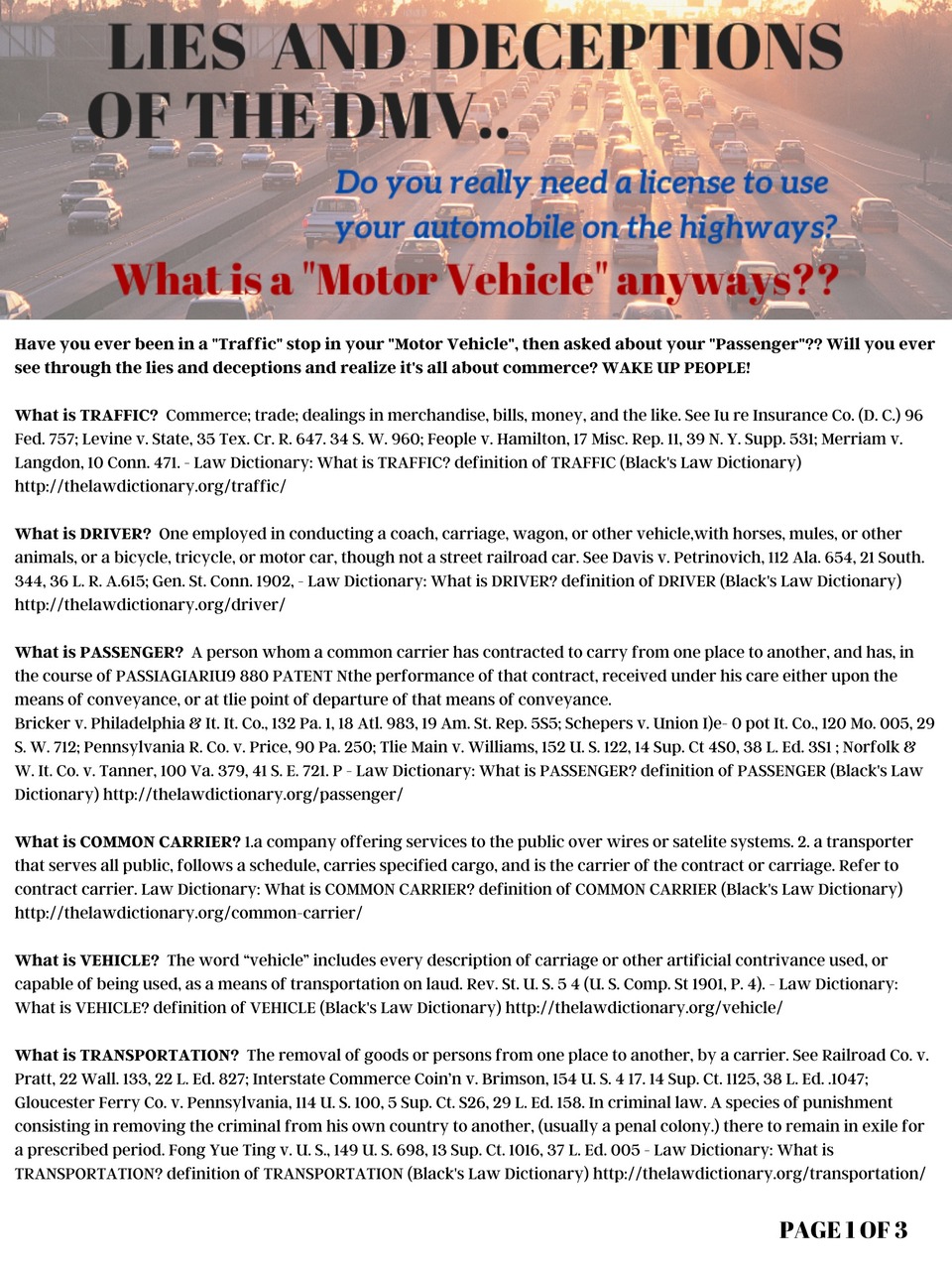 Lies and Deceptions of the DMV - What is a "Motor Vehicle" anyways?
Have you ever been in a "Traffic" stop in your "Motor Vehicle", then asked about your "Passenger"?? Will you ever see through the lies and deceptions and realize it's all about commerce? WAKE UP PEOPLE!

What is DRIVER? One employed in conducting a coach, carriage, wagon, or other vehicle,with horses, mules, or other animals, or a bicycle, tricycle, or motor car, though not a street railroad car. See Davis v. Petrinovich, 112 Ala. 654, 21 South. 344, 36 L. R. A.615; Gen. St. Conn. 1902, - Law Dictionary: What is DRIVER? definition of DRIVER (Black's Law Dictionary) http://thelawdictionary.org/driver/

What is PASSENGER? A person whom a common carrier has contracted to carry from one place to another, and has, in the course of PASSIAGIARIU9 880 PATENT Nthe performance of that contract, received under his care either upon the means of conveyance, or at tlie point of departure of that means of conveyance.

What is VEHICLE? The word “vehicle” includes every description of carriage or other artificial contrivance used, or capable of being used, as a means of transportation on laud. Rev. St. U. S. 5 4 (U. S. Comp. St 1901, P. 4). - Law Dictionary: What is VEHICLE? definition of VEHICLE (Black's Law Dictionary) http://thelawdictionary.org/vehicle/

The term “used for commercial purposes” means the carriage of persons or property for any fare, fee, rate, charge or other consideration, or directly or indirectly in connection with any business, or other undertaking intended for profit. https://www.law.cornell.edu/uscode/text/18/31

HAVING A LICENSE IS PRIMA FACIE EVIDENCE ONE WANTS TO BREAK THE LAW, IT MAKES ONE LICENTIOUS.

What is LICENTIOUS? term used to apply to the lewd behavior exceeding moral and customary bounds.Law Dictionary:

What is LICENTIOUS? definition of LICENTIOUS (Black's Law Dictionary)

GO OUT AND SEEK THE TRUTH, DO YOUR OWN DUE DILIGENCE AND RESEARCH AS TO THE FINDINGS HERE AND DETERMINE FOR YOURSELF WHAT THE TRUTH IS.

Department of Motor Vehicles - The headquarters of the largest DMV of all: the California Department of Motor Vehicles.In the United States, a department of motor vehicles (DMV) is a state-level government agency that administers vehicle registration and driver licensing. Similar departments exist in Canada. The name "DMV" is not used in every state or province, nor are the traditional DMV functions handled by a single agency in every state, but the generic term is universally understood, particularly in the context of driver's license issuance and renewal. https://en.wikipedia.org/wiki/Department_of_Motor_Vehicles Terminology and organization Driver licensing and vehicle registration in the United States are handled by the state government in all states but Hawaii, where local governments perform DMV functions. In Canada, driver licensing and vehicle registration are handled at the provincial government level. https://en.wikipedia.org/wiki/Department_of_Motor_VehiclesUnited States -

The Uniform Vehicle Code prefers the name "Department of Motor Vehicles".[1] The acronym "DMV" is most commonly used to describe the agency (where it exists); however, diverse titles are used in different jurisdictions. Unless otherwise indicated below, one agency or division regulates driver licensing, vehicle registration, and vehicle titles. https://en.wikipedia.org/wiki/Department_of_Motor_VehiclesUniform Vehicle Code - From Wikipedia, the free encyclopedia https://en.wikipedia.org/wiki/Uniform_Vehicle_Code

The Uniform Vehicle Code (UVC) is a privately prepared set of United States traffic laws prepared by the National Committee on Uniform Traffic Laws and Ordinances, a private non-profit organization. Most of the members are state governments, in addition to some related organizations. The extent to which the code is used varies by each state, the District of Columbia, territory, and Native American tribe. It was last updated in 2000. https://en.wikipedia.org/wiki/Uniform_Vehicle_Code

NCUTLO - Some time not long after the release of the 2000 edition, " [the] NCUTLO went into hiatus because of a lack of funding. The primary problem was that the Internet provided, at no cost, much of the information that was previously easily available only from the committee for the cost of an annual membership."[1] In the absence of an active NCUTLO, the NCUTCD (the NCUTLO's counterpart in the development of the Manual on Uniform Traffic Control Devices) has appointed a task force to review potentially outdated portions of the most recent edition of the UVC, and to propose updated language. https://en.wikipedia.org/wiki/Uniform_Vehicle_Code

Not only are they misapplying commercial statutes on us (A power derived by a Clause in Article 1 Section 8 to “Regulate Commerce”), but in fact they may also be using A Clause from Article 1 Section 8 of the U.S, Constitution that says they can make "rules" in ALL cases whatsoever in the District which shall become the seat of the U.S. Government... Washington D.C. and misapplying those statutes on the Sovereign States of the Union and the Sovereign people outside of said District...

GO OUT AND SEEK THE TRUTH, DO YOUR OWN DUE DILIGENCE AND RESEARCH AS TO THE FINDINGS HERE AND DETERMINE FOR YOURSELF WHAT THE TRUTH IS.